It has been a week of mixed feelings for culture in the European Parliament in Brussels, where yet another plenary took place these days in the impossibility to travel to Strasbourg. The European Commission President Ursula von der Leyen delivered her first ever State of the Union speech (the ninth of its kind), a defining political moment for outlining the EU priorities almost one year since the start of her mandate. Unlike previous speeches that were more budget-oriented, von der Leyen  focused more on the policy challenges ahead, from the green transition to the digital, from the reform of migration and asylum framework to upholding equality in the Union. Crucial dossiers that have been in eye of the storm in the past months and that are now under negotiations – namely, the long-term budget and the Next Generation EU Recovery Fund – have been rather left aside.

Culture did not make it to the 79-minute speech of the Commission President, if not through generic remarks on the new paradigm for Europe – “Our project is not just environmental or economic: it needs to be a new cultural project for Europe” – and the idea to “set up a new European Bauhaus – a co-creation space where architects, artists, students, engineers, designers work together”. The latter, however, raises more questions than it answers, and will hopefully be followed up with more precise remarks by the Commission on what it intends to do and how it will engage the creative community.

Although left in shadow in von der Leyen’s speech, CCS made it to the plenary’s spotlight, where resolution on the ‘Cultural Recovery of Europe’ was approved with an overwhelming majority (598 MEPs out of 686) yesterday. This non-binding resolution follows the topical debate that was hosted in plenary last July with the Vice-President of the Commission Margaritis Schinas and will have a crucial political weight in shaping what role culture will play in the recovery of Europe.

A comprehensive and solid text, it has been backed by all major groups of the Parliament (EPP, S&D, Renew Europe, Greens/EFA, ECR, GUE/NGL) and sets some clear key priorities that cultural and creative sectors have been advocating for in the past months.

While culture has been among the most affected by the pandemic, the resolution acknowledges that the current challenges present an opportunity for ‘rethinking the future of culture’, creating ‘more resilient cultural ecosystems’ and developing new culture policies ‘deeply interconnected with social challenges as well as with the green and digital transition’. It shows support for the CCS-led campaign such as #Double4Culture to double the budget of Creative Europe, bringing it to 2,8 billion euros (in the MFF proposal set up by the European Council last July it still is at an unambitious level of 1,64 billion euros). The resolution also puts  culture and cultural and creative sectors at the forefront of Europe’s recovery, targeting the 672 billion euros Recovery and Resilience Facility (RRF) – which gets the lion’s share of the Next Generation EU Recovery Fund, directly channeling the money to the Member States -.

Earlier  in May, together with  the European Cultural Foundation, Culture Action Europe  called for a fair share (7%) of the Recovery Plan to be devoted to culture. While no specific earmarking has been made in the Next Generation EU as a whole, it is crucial that national plans now take this dimension into account.

MEPs have also mirrored such plea with an amendment in the committee on Budgets (BUDG), which together with the committee on Economic Affairs (ECON) is having a say on the national recovery plans. Yesterday, the European Commission published the guidelines for the implementation of the RRF – no mention of culture is however to be found in the document.

The resolution is not only about fresh money to hard-hit CCS. It also calls on the Member States to provide adequate guarantees so that the SURE scheme can  uphold employment in the Union reaching out to freelancers and non-formal workers. And 13 years after the last time the topic was brought in a text of the European Parliament, the resolution additionally asks for the introduction of a “European framework for working conditions in the cultural and creative sectors and industries at EU level, that would reflect the specificities of the sector and would introduce guidelines and principles in the view to improve the working conditions with particular attention to transnational employment.” It echoes a call to focus on labour conditions of artists and cultural and creative workers made by several representatives of the sector, in line with what is foreseen in the Council Work Plan for Culture 2019-2022. 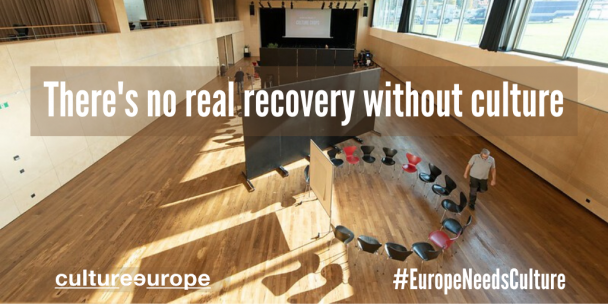