On Thursday, 9 June, the European Parliament adopted a resolution calling on the European Council to agree to start the process to revise the EU Treaties.

This day marks exactly one month since, on Europe Day, the CoFoE Executive Board presented the final report of the Conference to the Presidents of the EU Institutions, which includes 49 proposals comprising more than 300 measures across 9 themes, based on 178 recommendations from the European Citizens’ Panels, input from the National Panels and events, ideas from the European Youth Event, and 43,734 contributions on 16,274 ideas recorded on the multilingual digital platform. This report comes as a result of a two-year process gathering the concerns and visions for the Future of Europe, including the voices from Culture Action Europe’s project, “Amplify: Make the Future of Europe Yours.” The recommendations that came from this participatory process across 12 countries became part of the ongoing debate and considerations that shaped this final report, including their reflection in the interim reports used to shape Conference panels and plenaries.

In light of the array of ongoing and recent crises, MEPs used their prerogative to call for the Treaties to be changed at various levels.

First, a reform of voting procedures was suggested to the Council so as to enhance the European Union’s capacity to act. The Parliament also proposed to adapt the EU’s powers, especially in the areas of health and cross-border health threats, in the completion of the energy union based on efficiency and renewables in line with international agreements on climate change, defence, and social and economic policies.

Moreover, the need to ensure that the European Pillar of Social Rights is fully implemented was underlined through the incorporation of social progress, linked to a Social Progress Protocol, into the Treaties, as well as the importance of making the EU economy more resilient.

Moving forward, it will be up to the 27 member states’ heads of state or government at the European Council to decide to set up a Convention, by a simple majority. Many MEPs have called for this to happen at the earliest opportunity, which would be the EU summit on 23-24 June, to ensure that citizens’ expectations are met and that the outcome of the Conference on the Future of Europe is put to good use as soon as possible. The Convention should comprise MEPs, Commissioners, MPs from the member states, and EU leaders.

While the major changes needs a Treaty revision to happen, many demands included in the CoFoE final reports can be already responded through ordinary legislation and existing tools, including – for instance – the call to “ensure that cultural professionals are sufficiently protected at EU level, particularly in any future crises, by adopting a legal statute at European level”, as recommendation 48.5 reads.

The Amplify project hosted their final event, #AmplifyinAction, which also took place on same day as the final event of the Conference on the Future of Europe, bringing together cultural agents across Europe in dialogue with policymakers such as MEPs Laurence Farreng, Alexis Georgoulis, Niklas Nienaß as well as Deputy Counsellor for Culture, French Presidency of the Council of the European Union, Guillemette Madinier, and Senior Policy Officer at the European Commission’s DG EAC, Angelos Agalianos.

There, the policymakers were able to address issues pertaining to the cultural sector more directly. “The Conference on the Future of Europe is just a starting point of a better understanding of the importance of culture for the EU. We also wanted to raise awareness on better working conditions of artists,” MEP Ferrang stated while Guillemette Madinier added that there is a strong will to do more to support artistic mobility and ensure access and participation in culture.

Rewatch the #AmplifyinAction event to see how diverse communities across Europe would like their voices to be taken up into action by policymakers moving forward. Next, following the adoption of the resolution on 9 June, the EU leaders will next gather for a summit on June 23 and 24. 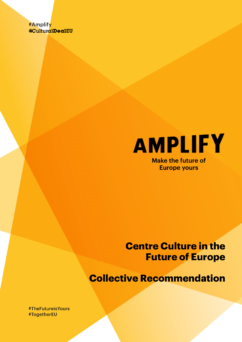