On 9 May, Europe Day 2022, the project “Amplify: Make the Future of Europe Yours” concluded with its final event, #AmplifyinAction, dedicated to taking action to make the voices of artists, cultural workers, activists and community leaders heard by decision-makers across Europe. Both in-person and live-streamed, this full day of action put arts and culture at the centre of discussions around the future of Europe and featured the voices of the Amplify participants, covering issues related to climate, youth, equity, diversity and inclusion, values and rights, among others.

“Amplify: Make the Future of Europe Yours” is a European Parliament-funded project working across 12 European countries that brought marginalised and underrepresented voices in the cultural sector to the Conference on the Future of Europe. After the community listening sessions were held, project members – or “Hubs” as they are called in the Amplify project – worked together to write a set of recommendations to EU decision-makers, focusing on ideas, hopes, and demands for the vision of the Future of Europe, ranging from topics relating to climate, youth, equity, diversity and inclusion, values and rights, to name a few. The hubs also had the opportunity to share why exactly the issues they brought up were specific to their local or national contexts.

The diverse voices that have made up the Amplify project for the past 18 months, were loud and clear at #AmplifyinAction. Moderated by Reine Elisabeth Nkiambote, television journalist and podcastmaker and Mick ter Reehorst, founder of Are We Europe media collective, the event kicked off with its first session, Culture as an opening act, with speeches by Ukrainian multidisciplinary artist and designer, Polina Moroz, and Spanish Journalist Beatrice Duodu. “Many of my friends in Ukraine who are artists and creators have joined the resistance because without freedom and without freedom of speech there is no art, there is no life” Polina proclaimed while Beatrice stressed the lack of diversity and the lack of representation of people of colour. “It’s not about me and my job. It’s about every little girl watching the news and thinking that one day she is going to be there because she has a lot to contribute to this society, she is part of it, and she matters,” she pointed out. 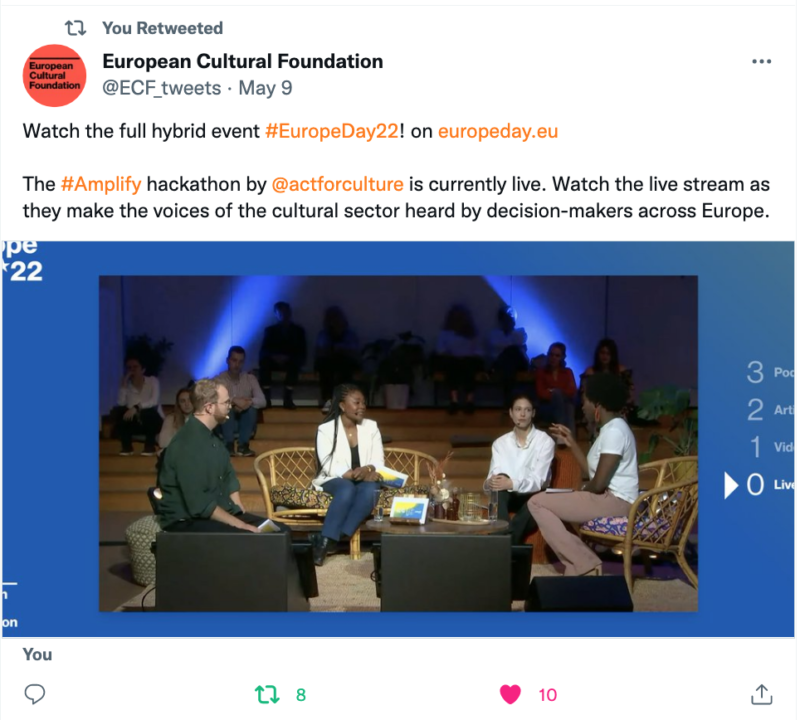 The second session of #AmplifyinAction, Bridging culture and politics, was a fruitful conversation on the Conference on the Future of Europe (CoFoE) and the future of culture in the EU, in particular, with Members of the European Parliament, Laurence Farreng, Alexis Georgoulis, Niklas Nienaß as well as Deputy Counsellor for Culture, French Presidency of the Council of the European Union, Guillemette Madinier, and Senior Policy Officer at the European Commission’s DG EAC, Angelos Agalianos, who reacted to questions asked live from the Amplify participants in Spain, Greece, Hungary, Portugal and France.

“The Conference on the Future of Europe is just a starting point of a better understanding of the importance of culture for the EU. We also wanted to raise awareness on better working conditions of artists,” MEP Ferrang stated while Guillemette Madinier added that there is a strong will to do more to support artistic mobility and ensure access and participation in culture. “One year later, do you see yourselves in the results of the CoFoE? I feel there is some distance between the hopes and the expectations the Conference created and the outcome after lengthy filtering exercises,” Angelos stated while MEP Nienaß underlined that “citizens have asked for a closer Union of people: and this can happen only if we validate the role of culture. We need to give more competence to the EU, it should be the guardian of freedom of artistic expression.” MEP Georgoulis stated that “institutions should work more on processes to include all communities and foster intercultural exchanges and participation. Our main goal should be not to leave anyone behind.” 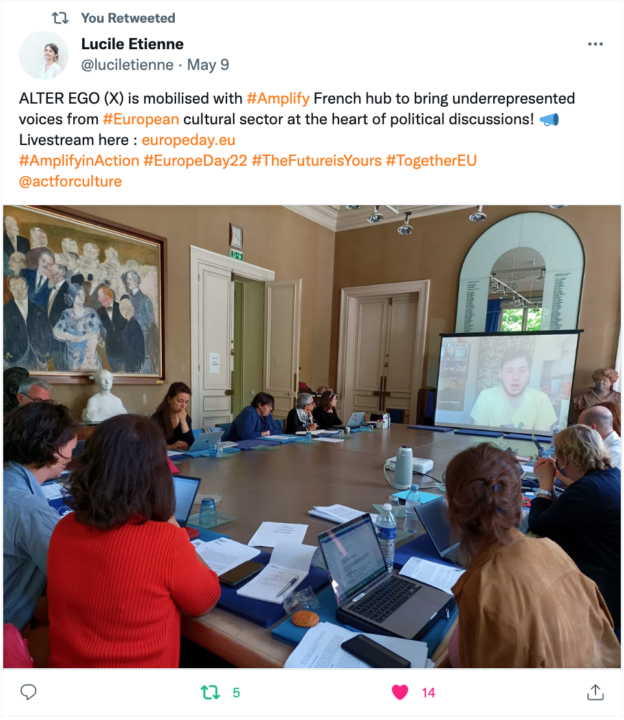 Amplify participants communicated their questions and concerns directly to the EU decision makers attending. The hub from Spain, led by Interarts asked, “Can we count on a sincere commitment of the EU Institutions to continue this dialogue beyond #EuropeDay22 and after the end of the Conference on the Future of Europe?” The French hub, led by Michael Culture, also took aim at the Conference on the Future of Europe, asking, “How do you explain the weak presence of culture in the final recommendations of the Conference on the Future of Europe and how to better take into account the under-represented and local communities to give them access to European fundings and let culture being at the heart of European belonging. What commitments can we make together?” Continuing the call for more representation of marginalised and local communities, the Greek hub, led by Communitism, as if “there is an action plan, addressing inclusion and accessibility of peripheral, small-scale cultural organizations in the European dialogue of cultural policy making.”

Following this policy-level conversation, the next session, Advocates in Action, focused on the grassroots-level dialogue, giving the hubs a center stage to highlight what the public and policymakers need to understand about local movements in the cultural sector. Starting off the session, Daryna Zhyvohliadova, researcher and cultural policy-maker from Ukraine intervened with a statement on behalf of the Ukrainian Cultural Sector. She called for additional supporting schemes for Ukrainian cultural professionals and for the protection of Ukrainian heritage as well as further cooperation with EU partners. “The arts should become a tool for social cohesion,” she highlighted in her speech. “I see culture through the concept of values, identities, ideas, meanings and cultural codes and now the cultural community directs all its resources to find brand new mechanisms, tools and ideas to defend these values.”

Participants from Sweden, Poland, Italy, Slovenia, and Denmark hubs then called in from each of their countries to share key messages and calls to action to publicly call out, engage and push local, national and European policy and decision-makers. The hub from Slovenia, led by  Motovila, expressed their hopes for the challenges and barriers to be overcome through more (international) cultural cooperation and stated that support from the local, national and European environment is essential. “Cultural actors generate a lot of economy and other people’s salaries but are the ones less paid and this is connected to the social security system,” stressed the Swedish hub, led by Trans Europe Halles. “It is a priority to bring together in a systematic way what already exists in the cultural, social and educational fields.” the Italian hub, led by Eccom, underlined. 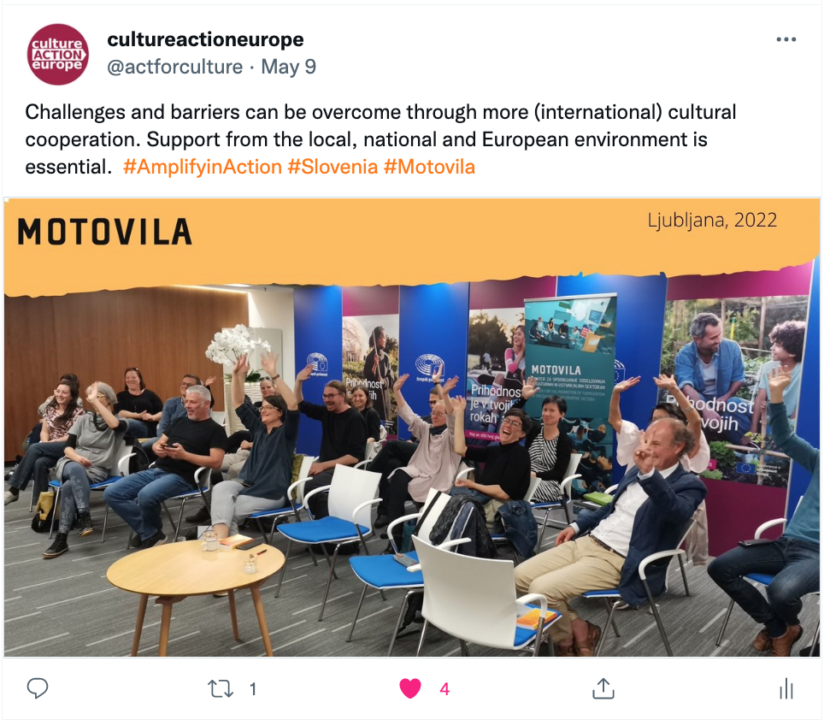 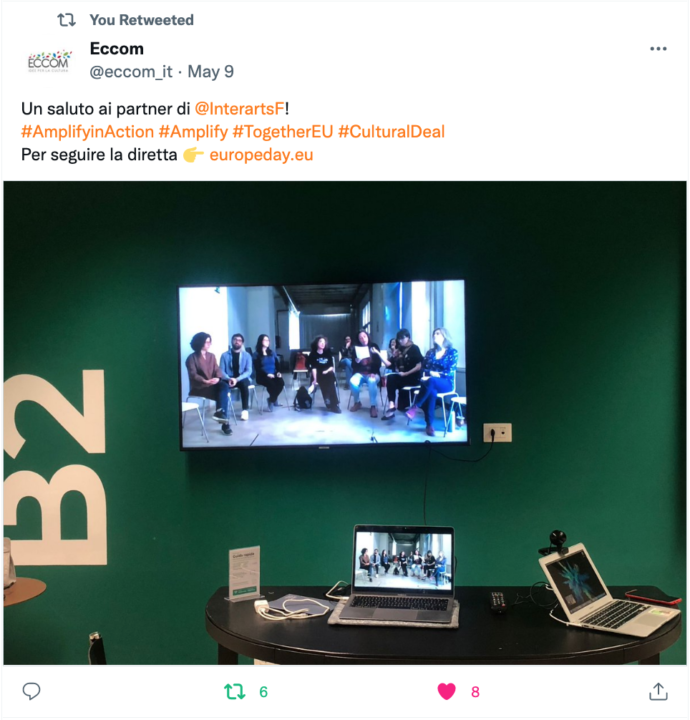 The #AmplifyinAction event included not only the debates and presentations of the day but also a live social media campaign, mobilising cultural agents across Europe as a united front to multiply voices and bring others along in realising the role of the culture in the shaping of the future of Europe. Culture Action Europe organised a Twitter takeover throughout the day, during which Amplify participants were given over control of CAE’s account to share their calls to action to a wider audience. The actions of participants encouraged other organisations and individuals from outside of the Amplify project to join the campaign by sharing their projects, initiatives, research, and contributions to push for the prioritisation of arts and culture in policymaking. 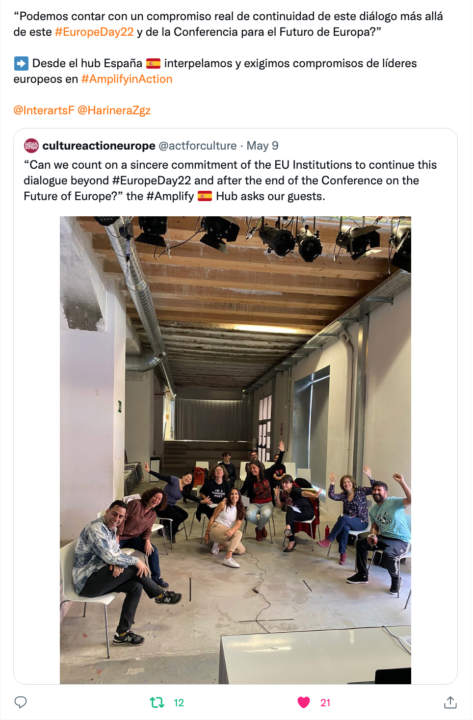 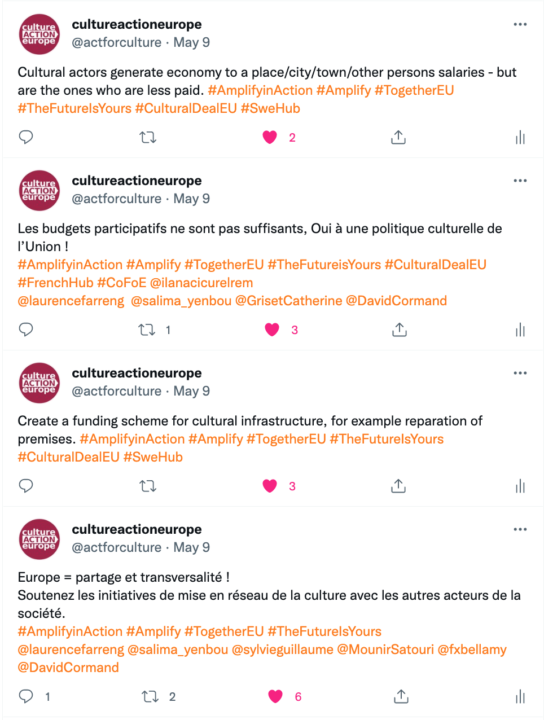 Later in the day, the Mayday Magazine, a publication from Bozar focusing on the war in Ukraine, was launched during an interview in studio with Teresa O’Connell, Editor in Chief and Taras Nazaruk, the head of Digital History project from the Center for Urban History joining over video from Lviv, Ukraine. Throughout the event, Francesca Vincentie, a folk, RnB, and pop artist and storyteller performed her songs telling stories of climate change, migration and identity. Francesca also served as an observer of the conversations and dialogue throughout the day and will be producing an artwork in response to the discourse, which will be shared later in the summer.

The event closed with a final session, Vernissage: Culture as a political language, during which arts students Carles Hidalgo, Zahra Rafaella Jorisse, Laura D. Kelemen, Ben Maier, Christina Maridaki, Noelia Martìn-Montalvo, Amy Opstal and Lina Selg showcased their artworks in digital exhibition entitled, “We imagine a Europe.” The students, which comprise the Amplify Netherlands hub, have engaged with underrepresented voices over the past year and developed artworks that create awareness and speak to policymakers about necessary change. Coordinated by H401, with the collaborative support from Creative Court and Het Geluid Maastricht, the Amplify Dutch hub used the #AmplifyinAction platform to advocate for the language of the arts to be heard, as it can give voice to those that can be otherwise overlooked. They finalised the #AmplifyinAction event with enthusiastic calls for Europe to take action on crucial issues concerning culture, youth, inclusivity, LGBT+ rights, gender equality and precarious workers’ rights. 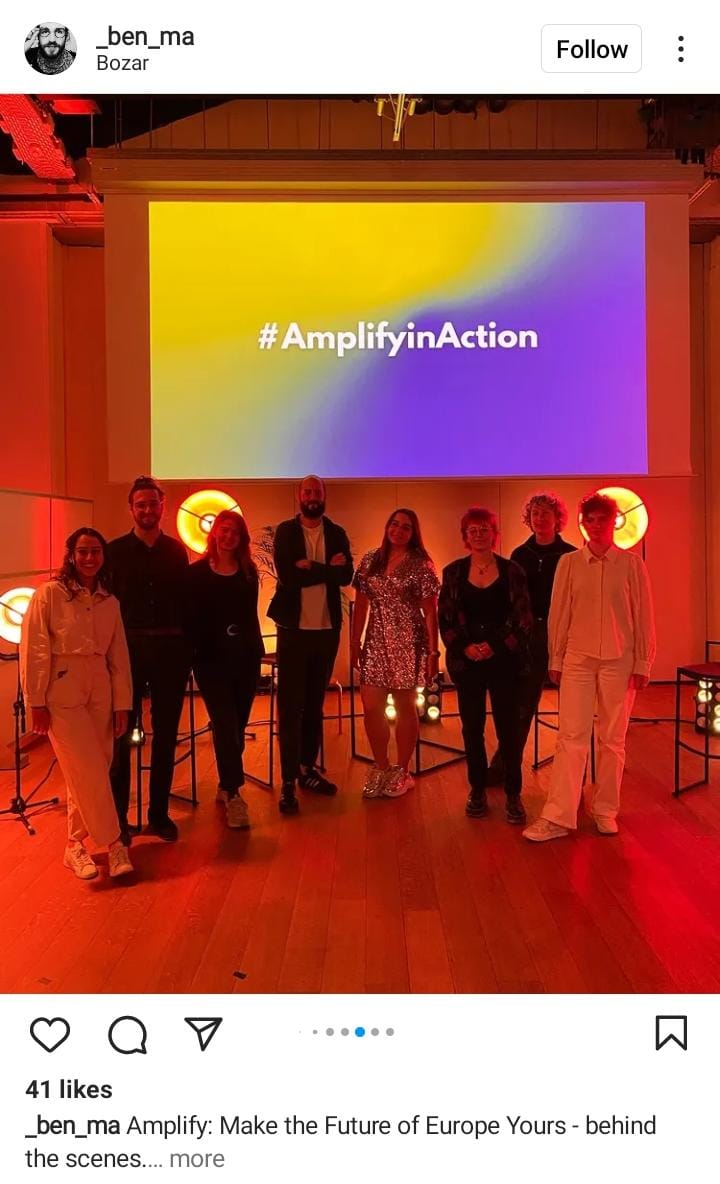 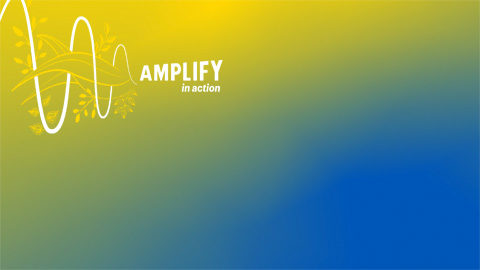