Last week, the European Parliament called on the EU to urgently support Ukraine in documenting attacks against its cultural heritage and to help with reconstruction. In the resolution “Cultural solidarity with Ukraine and a joint emergency response mechanism for cultural recovery in Europe” adopted by Members of the European Parliament (MEPs) on 20 October 2022, call on to include the emergency needs of the culture and cultural heritage sectors in the EU’s humanitarian support to Ukraine. MEPs also asked for this support within the planned Ukraine Trust Fund for rebuilding the war-damaged country’s infrastructure.

“Russia has waged war against Ukraine also on the cultural front – attempting to delete all heritage of Ukraine’s history and tradition,” Sabine Verheyen (EPP, DE), chair of the Culture and Education committee of the European Parliament said, preceding the vote. She invoked all sectors, from public to private, as well as civil society, to work together in order to find new instruments to help rebuild the country. “We have to help Ukrainians rebuild their cultural heritage. We have to provide them our support – that is the task of a European Union that is built on values“, she concluded.

The resolution supports the call of the #CulturalDealEU campaign, pleading the EU to demonstrate a Culture of Solidarity with cultural actros from a war-stricken country and to take the lead in proposing emergency response and recovery mechanisms for the cultural, cultural heritage, and creative sectors. The campaign pleaded with the EU to explore the feasibility of combining and multiplying any future EU endeavors with actions undertaken by European philanthropy and Europe’s civil society active in the field. “This could lead to an innovative joint public philanthropic venture to be established independently as a pooled fund for the cultural sectors in Ukraine”, – reads the letter sent to the president of the European Commission Ursula von der Leyen, president of the European Parliament Roberta Mestola and then the Council Presidency, president of the French Republic Emmanuel Macron in March 2022.

The Cultural Deal for Europe #CulturalDealEU is jointly developed by Culture Action Europe (CAE), the European Cultural Foundation (ECF), and Europa Nostra, also in its capacity as coordinator of the European Heritage Alliance.

The EP resolution adopted by a show of hands stresses that Russia’s attempt to eradicate the Ukrainian identity and culture through targeted acts of destruction of cultural heritage sites is a war crime under the Hague Convention.

Proceeding the resolution, the European Parliament’s Sakharov Prize 2022 for Freedom of Thought has been awarded to the brave people of Ukraine, represented by their president, elected leaders and civil society. European Parliament President Roberta Metsola announced the 2022 laureate in the Strasbourg plenary, following a decision by Parliament’s Conference of Presidents (the President and political group leaders).

“This award is for those Ukrainians fighting on the ground. For those who have been forced to flee. For those who have lost relatives and friends. For all those who stand up and fight for what they believe in. I know that the brave people of Ukraine will not give up and neither will we“, she said.

The Sakharov Prize for Freedom of Thought is awarded each year by the European Parliament. It was set up in 1988 to honour individuals and organisations defending human rights and fundamental freedoms. Last year, Parliament awarded the prize to Russian opposition politician and anti-corruption activist Alexei Navalny. 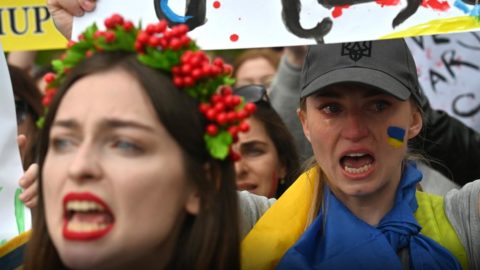