How does cycling on an abandoned railroad in Norway sound to you? How about going on a geological wine-tour, in Germany? Maybe drinking from a miraculous healing spring in Austria and sword fighting in a shiny armour is more to your liking. If none of these entice you perhaps an Italian monster with a black body, yellow eyes and the head of a toad does! However, if shaking your feathers is more to your taste, then Turkish clarinet musicians that play for hours will certainly make you twinkle! These are just some of the curious stories you will find in the newly released RURITAGE Project “Travelling Voices” book. Apart from those, 24 other stories written by Tóth Gyula Gábor and illustrated by Livia Hasenstaub, will take you on a virtual tour of RURITAGE’s six Replicators territories.

Initially planned as a modern-days troubadour that would travel along RURITAGE regions by train while registering his/her interactions with the local population via social media, the activity had to be rethought due the travel restrictions imposed by COVID19. After considering many options and evaluating proposals from several artists, Gyula’s proposal, based on a visual story-telling approach, was the winner. It took months of interviews, gathering information about the regions and the project, curating images, writing and drawing to create the wonderful Travelling Voices book. The book is now ready to be shared with the world and tell the stories of six regions in Europe which are using their natural and cultural heritage as drivers of rural regeneration. 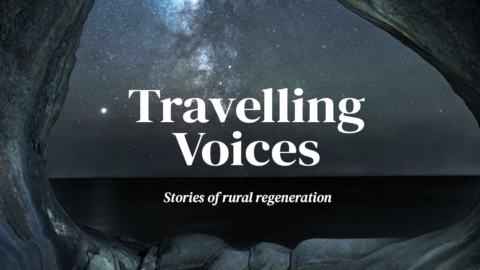