The third edition of the Annual Policy Conversation “A Cultural Deal for Europe” brought the European cultural ecosystem in a dialogue with  EU policy-makers, advocating for culture to be central in the EU’s green and sustainable future.

The online event happened in the framework of the #CulturalDealEU campaign, jointly developed by Culture Action Europe, the European Cultural Foundation, and Europa Nostra also in its capacity as coordinator of the European Heritage Alliance. The urgency to put culture at the centre of EU policy making has become even more significant due to the COVID-19 pandemic: “Artists were hit first, the hardest, and also the longest,” said the President of the European Commission, Ursula von der Leyen, welcoming the conference participants in a video message.

After a tribute to the late President of the European Parliament David Sassoli, who was a close ally of the Cultural Deal for Europe campaign (re-watch here his message recorded for the 2020 edition), the event, moderated by Tamsin Rose, senior fellow of Friends of Europe, focused on three main sessions putting a spotlight  on culture’s contribution to the  recovery, sustainability and the future of Europe. More than 700 participants followed the event live.

In her message, European Commission President Ursula von der Leyen recalled “the hardship the pandemic has caused […] for everyone working in the cultural and creative sector” highlighting that “Europe stands ready to help”. With the recovery on the horizon, she emphasised that the European Green Deal is more than an environmental or economic project, but also a cultural project for Europe, promoting the role of the cultural and creative sectors to take action in the fight against climate change.

In her keynote speech and in line with the President’s message, European Commissioner for Innovation, Research, Culture, Education and Youth, Mariya Gabriel added that “the cultural and creative sectors are Europe’s strongest assets and they have a role to play in Europe’s recovery”. The Commissioner highlighted that the new Council Work Plan for Culture 2023-2026, the main roadmap to align cultural policies in the EU to be drafted this year by the Member States is the opportunity to “underline important priorities in the agenda of European cultural cooperation”, “establish the right working methods to tackle European priorities”, and “reinforce culture’s contribution to Europe’s recovery and sustainable future”, while recognising “the true mission of culture in finding tomorrow’s answers to today’s challenges”.

Culture for Recovery and Sustainability in Europe

During the first session of the event, “Culture for Recovery and Sustainable Future,” Tere Badia, Secretary General of Culture Action Europe, building upon the results of  the Culture in the EU’s Recovery and Resilience Plans publication, emphasised that despite the 2% overall allocation for culture at the EU level in the Recovery and Resilience Facility – the key instrument aiming at helping the EU to emerge stronger and more resilient from the current crisis – , most countries lag behind this number on the national level in their Plans. She underlined that this can result in increasing inequalities between cultural actors across Europe. At the same time, funding is just one side of the coin: the political and strategic dimension needs to be addressed to achieve real change. And for this, Tere Badia suggested, there’s a need for a paradigm shift that will not be achieved if the cultural dimension is not taken into account in wider policy fields and without strengthening the cultural ecosystem and its workers. Those pleas were echoed by Elena Polivtseva, Head of Policy and Research of IETM, who underlined the need to put culture back in the policy agenda of the EU institutions, going beyond the current instrumentalisation that links it to several societal challenges and changes. Inês Câmara, co-founder of Mapa das Ideias, reiterated the demands highlighting the inclusive nature of culture and the role of cultural democracy and cultural participation to promote a more sustainable future for our communities.

MEP Monica Semedo (Renew Europe, Luxembourg), who has been drafting the European Parliament report on the post-COVID cultural recovery in the EU, addressed the issues of economic recovery as well as social and economic security which would lead to better resilience of cultural sectors in the long run. Linking the main issues discussed with the priorities of the ongoing French Presidency of the EU Council, Guillemette Madinier, the cultural attaché adjunct at the French Permanent Representation to the EU, complemented the discussion with reference to the EU’s work ahead in the domain of working conditions as well as access to culture and cultural participation. The latter topic will be the focus of a dedicated debate at the Council meeting of the Ministers of Culture in April, she announced. In July, France will pass over the torch to the Czech Republic at the helm of the Council, which will finalise the process leading to the adoption of the next Work Plan for Culture 2023-2026. Yvona Havel, the cultural attaché at the Czech Permanent Representation to the EU, assured that the process leading to the approval of the next Work Plan will be a participatory one, open to inputs coming from cultural and creative sectors both at national and European levels.

Culture and cultural heritage in the European Green Deal

Opening the second session, Elisa Ferreira, European Commissioner for Cohesion and Reforms, added an additional layer to the conversation in her video message, highlighting that culture is not only a factor of social cohesion and democracy, but also of regional development. She underlined the importance of Cohesion Funds for cultural exchanges across regions as well as for fostering international cultural relations.

Her remarks were echoed by MEP Marcos Ros Sempere (S&D, Spain), co-rapporteur of a joint own-initiative report of the CULT and ITRE Committees of the European Parliament on the New European Bauhaus (NEB). He referred to the NEB as a tool for promoting democratic participation and the creation of participatory and accessible public spaces. Sneška Quaedvlieg-Mihailović, Secretary General of Europa Nostra, shed light on the cultural dimension of the European Green Deal, addressing the importance of the role of culture and heritage in Europe’s green transition: “It will require first and foremost a cultural shift in mindsets and lifestyles.” The necessity of a cultural shift to enable climate action was also highlighted by Jordi Pascual, Coordinator of the United Cities and Local Government (UCLG)’s Committee on Culture, while MEP Salima Yenbou (Greens/EFA, France) stated that “culture, the arts, climate action and sustainability are a cross-border issue and should be at the heart of the EU’s external relations”.

In her reaction, Ruth Reichstein from the European Commission’s I.D.E.A. Advisory Board to the President on the European Green Deal and New European Bauhaus highlighted the need to put forward a participatory and holistic approach in the NEB combining the principles of sustainability, beauty, inclusiveness. MEP Iskra Mihaylova (Renew Europe, Bulgaria) emphasised that the NEB initiative supports the sustainable development of cities and regions across Europe through its integrated approach as well as its democratic and inclusive feature. Kieran McCarthy, Member of the European Committee of the Regions, mentioned the Committee’s upcoming opinion on the NEB, which will stress the vital role of local authorities to enhance the green transition and the need for more bottom-up approaches to advance culture-based climate action.

Culture for the Future of Europe

Finally, in the third and last session entitled “Culture for the Future of Europe”, Gijs de Vries, former Dutch Secretary of State and MEP, and currently a senior visiting fellow at the London School of Economics and Political Science (LSE), presented his paper “To make the silos dance. Mainstreaming culture into EU policy”, a major contribution to the #CulturalDealEU campaign for mainstreaming culture across all six current priorities of the von der Leyen Commission.

Vivianne Hoffman, Deputy Director-General of Directorate-General for Education, Youth, Sport and Culture (DG EAC) of the European Commission, addressed selected current actions of the Commission to support the cultural and creative sector including, among others, the launch of the CulturEU funding guide, the increase of the Creative Europe envelope, and mainstreaming culture in other funding instruments, e.g. Horizon Europe. Such a horizontal and collaborative approach was supported by André Wilkens, Director of the European Cultural Foundation, who underlined that the role of culture for the future or Europe goes beyond the current crisis and it is an opportunity to develop new innovative ways of joining forces for strategic cooperation and co-design: “The #CulturalDealEU is an invitation to civil society too, not one to governments only. It’s high time for foundations to gear up their action, get more political, and explore new funding avenues connecting private and public resources for Europe.”

Reacting to these interventions, Lucia Recalde, Head of Unit for the Audiovisual Industry and Media Support Programmes  at the Commission’s Directorate-General for Communications Networks, Content and Technology (DG CNECT), and Matteo Bagnasco from Fondazione Compagnia di San Paolo and Co-Chair of the European Foundation Centre (EFC)’s Arts and Culture Thematic Network, promoted the importance of innovative ways of financing, as well as the need for synergies and co-creation with citizens, local and national stakeholders, respectively, for the recovery and sustainability of the cultural and audiovisual sectors.

The event was closed by a video message of the French Minister of Culture, Roselyne Bachelot, linking the main recommendations of the #CulturalDealEU with the ongoing policy agenda of the rotating Council Presidency. In her closing remarks, MEP Sabine Verheyen, Chair of the European Parliament’s CULT Committee, underlined the importance of the #CulturalDealEU campaign in bringing to the spotlight the huge value of culture for our society, its vital contribution to our well-being and the need for artists and cultural workers to participate in the change management processes.

Read the detailed report of the event here.

The live illustration of the event by visual artists Menah allowed speakers and participants to visualise main takeaways of the discussions. 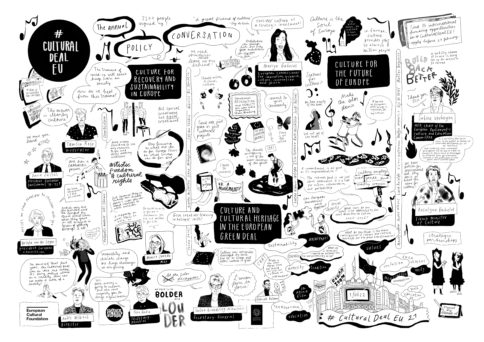