We are delighted to announce that Lars Ebert will be joining Culture Action Europe (CAE) as the new Secretary General as of 1 January 2023.

Lars is co-director of the cultural center H401 in Amsterdam, whilst maintaining an independent practice as advisor, facilitator and curator. Previously he was deputy director of ELIA – The European League of Institutes of the Arts. Lars has a long track record of successfully initiating and implementing EU funded multilateral projects on heritage, participation, education and research in and through the arts that he developed in parallel with local, interdisciplinary art programmes. He is a board member of various organisations in arts, culture, education and research such as EQ-Arts, which he co-founded and where he currently is the chair of the board. Lars has German nationality and holds a postgraduate degree in theology. He lives and works in Brussels and Athens.

“After almost five years in the secretary general position, I think it is time to give a new impulse to the network, under new leadership. As you know, I am deeply convinced that organisations like CAE need to periodically incorporate other perspectives and learnings in order to remain dynamic, agile and attentive to the evolution of the cultural sectors. I believe that over the last few years the collective efforts of staff, board and members have led the network to a situation that is coherent with its objectives and solid in its political interlocution. But maintaining this dynamic requires the capacity to change and adapt. I believe that now is the best time to keep moving the network forward. I am happy to welcome Lars to the team and I am sure that his long experience in the sector and his knowledge of CAE from his generous dedication to our board over the last six years, will bring new horizons to the network,” – said Tere Badia introducing Lars to the network during the Culturopolis: Beyond the Obvious 2022 gathering in Barcelona on the 16-19th November.

Lars Ebert: “Tere has done crucial work over the last years and leaves a strong organisation. CAE is now in a firm position to reinforce and focus the debate towards the fundamental challenges of our times. I look forward to the conversation with all members on CAE’s strategy as a leading platform for advocacy, debate and collaboration of our sectors.” 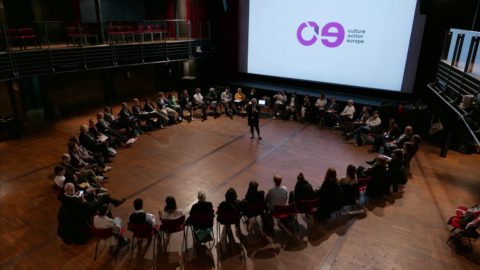