Today, Culture Action Europe ends the 18-month collaboration between communities across 12 European countries working to bring attention to the voices of underrepresented voices at the Conference on the Future of Europe and beyond. Over 350 motivated people debated what the priorities of policymaking should be at both the national and European levels and proposed a diversity of ideas, concerns and recommendations in the shaping of the future of Europe.

In the “Amplify: Make the Future of Europe Yours” project, participants from Denmark, France, Greece, Hungary, Italy, Netherlands, Poland, Portugal, Romania, Slovenia, Spain and Sweden held community listening sessions to investigate the challenges faced in the cultural sector, reflect on what is often misrepresented about their communities, raise issues that need more attention across Europe and question what makes a “better Europe?” Together, they developed a Collective Recommendation and brought their demands into dialogue with EU decision-makers at the #AmplifyinAction event.

On 9 May, Europe Day 2022, Amplify concluded with its final event, #AmplifyinAction, dedicated to taking action to make the voices of artists, cultural workers, activists and community leaders heard by decision-makers across Europe. Both in-person and live-streamed, this full day of action put arts and culture at the centre of discussions around the future of Europe and featured the voices of the Amplify participants, covering issues related to climate, youth, equity, diversity and inclusion, values and rights, among others. Throughout the day, hubs developed a campaign to publicly call out, engage and push local, national and European policy and decision-makers. See the recap video here.

As a European-wide project focusing on creating a platform for less heard voices in the cultural sector, the Amplify project opened the door for anyone interested in contributing. Alongside the Amplify hubs, other CAE members and those new to the CAE network took the opportunity to contribute their visions of a more diverse and inclusive future in Europe. Their recommendations include contributions from the Ukrainian Cultural Foundation and the Roberto Cimetta Fund. Participants from outside of the project also added to the 9 May #AmplifyinAction campaign over social media.

Francesca Vincentie, a folk, RnB, and pop artist and storyteller performed her songs at the #AmplifyinAction event, telling stories of climate change, migration and identity. Francesca also served as an observer of the conversations and dialogue throughout the day and produced a song, “8 Verses for Europe,” that was inspired by what many of the Amplify hubs discussed at the event: equal rights, freedom, the importance of supporting artists and cultural workers. The song also features studio clips from the speakers at the event and the video displays the artwork of #AmplifyinAction speaker Polina Moroz.

Many other artistic interventions came out of the Amplify project. In addition to their work on the policy recommendations for the Conference on the Future of Europe, Amplify participants chose to further showcase the importance of diverse artistic and cultural communities through different mediums. The Italian hub worked with an artist to ask community members about their concerns for the future of Europe. The Polish hub brought a facilitator in to lead an expressive painting workshop. The Netherlands hub was comprised of 11 art students who each worked on a creative project that focused on highlighting issues in their communities. Frequencies Podcast

The Amplify project also sparked the Culture Action Europe podcast, “Frequencies,” which explores arts and cultural initiatives that seek to impact and transform communities, near and far. Each episode features the work, voices, and experiences of artists and cultural workers across Europe and beyond. Many of the Amplify participants’ were featured, including the political work of a poet from the Slovenian hub, a story on the work of a community culture organisation REACC in Spain, and a collection of sound diaries from the Swedish hub. Listen to the current episodes here. 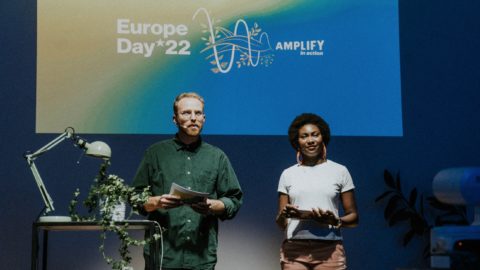