On 5 September, the CULT Committee discussed two studies on the implementation of the Creative Europe Culture sub-programme. These studies will complement the Commission’s evaluation and inform the definition of the next cycle of the programme.

The analysis carried out by the European Parliamentary Research Service pointed to four critical areas. Firstly, in terms of governance, the merger of the CULTURE and MEDIA programme has resulted in a hybrid management structure bringing together DG CONNECT and DG EAC. Each DG present different logics of intervention and raises a concern about the possible dominance of one logic over the other. The report provides data of the projects financed, showing an extreme polarisation between the MEDIA and CULTURE strand, while geographical concentration also remains high. 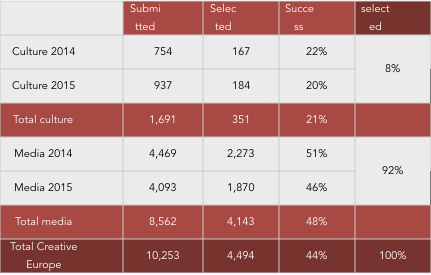 CAE elaboration based on EPRS report

In terms of award criteria and the policy priorities that guide them, officials stress that quality remains the core variable. Yet a special attention is given to the role of start-ups, SMEs and the main organisations operating in the cultural field. Consequently, the crucial role of public actors in fostering a healthy creative ecosystem seems to be downgraded. Attention is also paid to the misalignment between the existing indicators, mainly focusing on outputs, and the programme objectives and impacts. The report calls for the introduction of better qualitative and quantitative indicators through a delegated act. It also notes that access to finance might have been hampered by the delay in making the financial guarantee operative and questions the possibility to align the objective of ‘preserving diversity’ with that of assuring ‘competitiveness’ that the Commission has privileged.

The second study is based on a survey on the Creative Europe national Desks. From the Desk’s perspective the programme is successful and relevant, although certain sub-priorities such as audience development, the European Networks schemes, literary translation and cultural heritage appear to be less successfully implemented.

When it comes to sectoral representation, architecture, design, applied arts, and cultural heritage is under represented, while performing arts is adequately represented. The study finds that the main constrain for application is financial capacity, along with the trade-off between the considerable effort required from small and medium organisations when applying and the low amount and likelihood of obtaining financial support. In terms of recommendations, beyond refocusing priorities, the report suggests improving coverage by limiting the disproportion between the number of applicants and beneficiaries through an increase in budget, or through higher turnover of beneficiaries, more support to smaller-scale projects and improved geographical balance. Networks are concerned about the challenge of ensuring sustainability between funding cycles, as both reports also highlight.

The overall picture presented by the reports confirms the imbalance between the Media and Culture programmes. CAE has been invited to present its feedback on the implementation of Creative Europe in the S&D conference on the topic, with participation of MEPs and EC officials. We will be able to react to the results of the reports and present CAE’s recommendations based on the consultation with our members.