On behalf of Culture Action Europe (CAE), the European Cultural Foundation, and Europa Nostra, coordinating the European Heritage Alliance, we are happy to invite you to the online debate “A Cultural Deal for Europe” to be held on 18 November 2020 from 15h00 to 17h00 CET.

Last year, Culture Action Europe, the European Cultural Foundation and Europa Nostra, also in its capacity as the coordinator of the European Heritage Alliance, hosted a successful first ‘La Rentrée’ debate with seven of the newly elected members of the European Parliament, European Commission representatives, and about 100 stakeholders of the cultural, creative and cultural heritage sectors (23 September 2019, BOZAR). On this occasion, we received the best support from the Chair and Vice-Chairs of the European Parliament’s Culture and Education (CULT) Committee to make sure that culture is included in the title of the portfolio of a dedicated European Commissioner, and to advocate together for larger financial support for the cultural, creative and cultural heritage sectors in the next EU Multiannual Financial Framework (2021-2027).

One year on, we wish to continue our cooperation among the wider cultural stakeholders landscape and EU policymakers, starting every new EU parliamentary and political season with a joint debate on the most topical issues for the cultural, creative and cultural heritage sectors in Europe.

This year’s debate will reflect on critical questions about the role of culture for Europe’s recovery from the COVID-19 pandemic and, more widely, for the future of Europe, involving the European Commissioner in  charge of Innovation, Research, Culture, Education and Youth Mariya Gabriel, the European Parliament CULT Committee Chair Sabine Verheyen, other fellow MEPs, together with representatives of Member States and of other European institutions, as well as a broad range of stakeholders and civil society actors. We have also extended our invitation for a (video) contribution to David Sassoli, President of the European Parliament, as well as to Apostolos Tzitzikostas, President of the European Committee of the Regions.

The 2-hours long online debate will be organised around three key topics/chapters:

Chapter 2: “Philanthropy as contributor to the Cultural Deal for Europe”, introduced by André Wilkens, Director of the European Cultural  Foundation, in conversation with the  EU Commissioner Mariya Gabriel.

Chapter 3: “Culture and cultural heritage for the Future of Europe”, introduced by Sneška Quaedvlieg-Mihailovic,  Secretary General of Europa Nostra, featuring video message from the French Secretary of State for European Affairs Clément Beaune.

After each chapter, you will have the chance to take part in an online discussion with policymakers and various stakeholders from cultural, creative and heritage sectors, foundations and civil society. 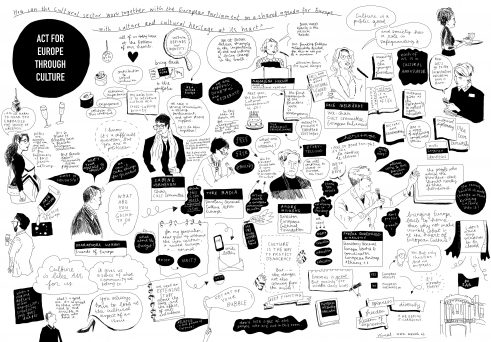