Europe is, ultimately, a cultural project and as such, culture should become a strategic element of the EU and its future. For the EC, Culture has a role to play in fostering economic development, contributing to external relations and building a ‘community of communities’ that harmonises past and present to give birth to the future. The European identity cannot be defined, yet it exists in a common imaginarium. It is a struggle to convince decision-makers of the importance of culture as often the cultural sector ‘lives in la la land when it’s Trump land out there’. Speakers’ saw institutionalisation as a risk, a belief that grounds the shift of EU programmes towards activity funding.

Vox poopuli: “How should we handle bureaucracy so that it doesn’t stop or affect the realisation of promising and mutually beneficial cultural projects?”

Commissioner Navracsics, in conversation with Corina Șuteu, former Cultural Minister of Romania and Robert Manchin, President of Culture Action Europe explored cultural policies in uncertain times. Commissioner Navracsics stated that culture will evolve in the direction the sector chooses to pursue. Culture, in his opinion, refers to a way of life, however ‘I am responsible of developing policies, not of directing lives’. In his view, Europe is and has always been a cultural project and as such, a strategic element of the EU project and its future. In this sense, the Commission sees that culture has a role to play in the fostering economic development and contributing to external relations. Also, it has a responsibility in promoting a ‘community of communities’ that harmonise past and present to give birth to the future. In this regard, he stated, while European identity cannot be defined, as it is multiple and complex, there is an instinctive understanding of our shared values.

Șuteu challenged the audience by stating that ‘we live in la la land when it’s Trump land out there’. Cultural systems and the values that ground them, such as liberal democracy and freedom of expression, are not necessarily shared by the wider society. As such, it is a struggle to convince Prime Ministers of the transversal contribution of culture. Ultimately, culture is marginalised because we place ourselves in the margins. Commissioner Navracsics noted that public institutions has approached this tension by shifting funding from institutions to activities. Creative Europe has been re-designed to change the logics of the game, one that is geared towards the creation of communities by investing in better partnerships and better cooperation. Creating European communities will be the greatest achievement of Creative Europe. Supporting the prior, Șuteu challenged us by asserting that cultural life does not happen in institutions and we must avoid the trap of institutionalisation. The risk is that we fall into a lethargic state of bureaucracy compliance, one that is incredibly time-intensive and diverts our energy to domains where culture can truly contribute. Șuteu compelled cultural operators to confront bureaucratic procedures and act jointly to shape them in a way that works for the cultural sector. (In this regard, CAE nods affirmatively and is currently finalising an in-depth report based on a cross-sectoral consultation on the functioning and priorities of Creative Europe) Last but not least, Șuteu noted that in an increasingly turbulent but multi-connected and interdependent world, the cultural diplomacy’s mechanisms at our disposal are akin to doing ‘brain surgery with a spoon’ (CAE is fully engaged with the Communication ‘Strategy for international cultural relations’. Join us on the 1st of March in the public hearing on the EESC’s opinion, coordinated by our head of policy, Katherine Heid. You can register here). 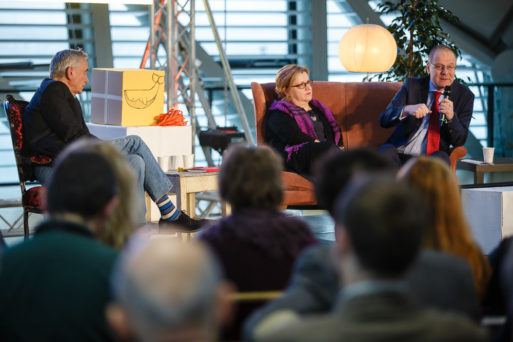